It’s what we’ve all been waiting for…the Team Sonic Racing Spiral Hill DLC pack! Buy it today to unlock Tangle, Whisper, & Jewel as racers, and race through Spiral Hill for the first time EVER! *sigh* I wish I could say it was real, but sadly, this is only an idea. HOWEVER, should anyone from SEGA see this, you can hire me! (my Dribbble page) Yes, because I can also 3D model(have you seen Belle?), so it’s like a 2-in-1 package, and everyone will be happy! (I’m serious…)

And for an individual look at things, we start with Tangle! Her car is titled “Wild Ride”, and you can read the short comic showing HOW she got in this thing. The “Wild Ride” is based on this electric bike that looks like a car, with the color scheme mainly derived from Tangle’s bicycle. There’s also a cover thingy that I suppose somehow expands to fit and form a top to the car.

Whisper’s car is much closer to the aspect ratio dimensions of a real car. “Diamond Razor” was modeled after a Lamborghini Ankonian with polygonal dodecahedron influence from stealth cars. The majority of colors were the same as Whisper’s apparel, the blue accents were swatched from her variable wispon.

Lastly, there’s Jewel in the “Morning Glory” (notice the morning glory design on the side of the vehicle) Jewel’s car was based on a 1960s Volkswagen Beetle(get it? Jewel the BEETLE) The color palette of this car relied heavily on the swatches of her unused concept apparel. 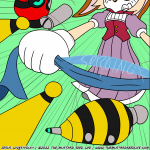 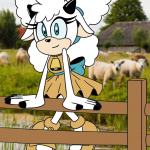 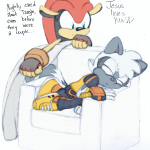 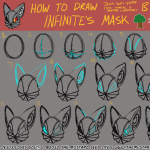