THIS. IS. IT. Shadow the Hedgehog. Whisper the Wolf. Lots of hugs going around, and compiled into one epic piece that is also within the dimension ratio for desktop wallpaper on your computer. (just heart if you want to thank me, haha)

And it’s also been divided into not one–not two–but THREE different wallpapers that are average phone screen dimension for you to choose from! You guys are SUPER awesome, always leaving hearts on the pages, I love seeing them and knowing that my work is enjoyed, so thank you!

So, on the left we see Shadow hugging Whisper(whose boot sole was drawn in the wrong direction on one foot, I won’t talk about it…) She’s obviously taken by surprise, and perhaps a bit of concern?

Moving to the right(yes, saving the middle for last) Whisper is hugging Shadow, and he’s the one in like, shock surprise?!

NOW THE MIDDLE…it’s Shadow and Whisper hugging, but now they’re BOTH embracing EACH OTHER.

Like, people, I drew this with pencil and marker in a sketchbook, scanned it in, and colored it digitally…(plus minor edits, and you recognize that fully digital background from a previous piece? REUSE!) I love giving them circle hands just because or when I don’t feel like drawing fingers, and I think that it actually works well! Check back soon! Jesus loves you!!! 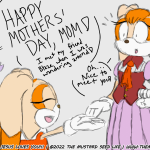 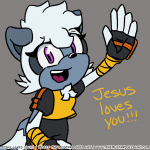 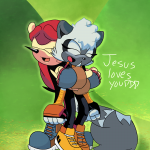