I’m back with the 4 Sonic Fanarts challenge(see the last one here)! I ran a poll, asking for folks to choose who I should NOT draw between: Infinite the Jackal(unmasked), Barby Koala, Slinger the Ocelot, Matilda the Armadillo, and Lanolin the Sheep. The most votes went to Barby, so she was eliminated from the get-go, but Infinite, Slinger, Matilda, & Lanolin all received sketches in the first “phase” of this challenge.

Interestingly, all four characters have a name with 7 or more letters(Infinite has 8), in contrast to the last time, where NONE of the chosen characters names exceeded 5 letters(random observation). Also, they’re all holding something with two hands(ex: Infinite–his arms; Slinger–presents; Matilda–music sheet; Lanolin–hot cocoa mug) 4 notable details are: 1. I penciled Infinite’s rudolph nose red(makes what it is more clear, right?); 2. Whisper has a “cameo”, as her name is on the “TO” tag of Slinger’s present; 3. Matilda singing “O Holy Night”; 4. Lanolin is wearing a more Christmas-y bell, rather than a cowbell…

After polling again, Matilda was eliminated for inking, which meant that Infinite, Slinger, & Lanolin faced-off for two spots to move on to flat colors — Infinite was knocked out.

It came down to Slinger vs. Lanolin for that grand prize of becoming a finished piece of art. The split was 50-50, and after requesting some help, someone graciously broke the tie. The vote was in favor of Slinger!

Slinger came out REALLY well(as did the others), and I’m glad I get to share a digital version of him! Just like with Bean, I created a printable Christmas ornament version of Slinger, since he was the winner! CHECK IT OUT! Huge thank you to everyone who participated in the polls for this piece, and to you for viewing, you’re awesome! Jesus loves you!!! 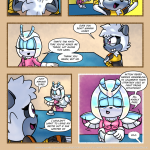 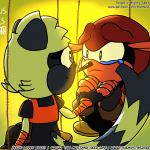 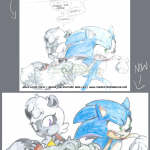 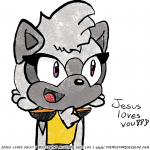