Paint swatches can serve as awesome prompts, especially when the titles include names of Sonic characters. Here’s 5 more that I did! (and for a progress view of HOW I do these, check out THIS post with Lanolin the Sheep) Jesus loves you!!!

Ray the Flying Squirrel soars through the air on the surface of this paint swatch titled “Sun Rays”. His right hand(or “left” to the viewer”) is actually drawn wrong…like, the thumb is completely on the wrong side! Still posting it tho’!

Peering through the bushes, no one is more fitting to appear on a swatch titled “Chameleon” than Espio…the CHAMELEON. He’s got some camouflage stuff on his face…what mission could he be on?

Seen above is Classic Amy Rose adorably winking with a flower held out on this swatch titled “Classic Rose”.

Who is this tripping over a rock? No other than Silver the Hedgehog…though the paint swatch is named “Silver Falls”, it’s more like Silver fall-ING…

And finally, we have Shadow the Hedgehog blushing out of embarrassment in “Embarrassed Shadow”. This one is the most off-center of the five, but I will note that this swatch was a tall one(whereas the other swatches were squares), I just didn’t draw all the way to the bottom. 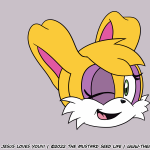 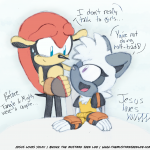 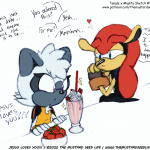 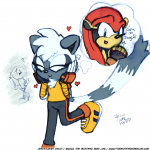