Jesus loves you!!! I’m sharing some random Sonic the Hedgehog fanart!(is it fanart, fan-art, or fan art?) Sonic Art done on a whim, to unwind, just ’cause. And if you like these pieces, find more fanart here (that’s right, just click on the word, “here“). You can also support on Patreon! FANART!

It’s Belle the Tink-Egg-er! I used more than one color to achieve that green for her hat, and it still wasn’t light enough…If you like this Belle Egg, chances are you’ll be interested in…(make sure you hear the next part in a game show host revealing voice)…the Belle 3D Model! Yep, I’m 3D modeling Belle, and as of now her head, body, and arms are pretty much done, and I’m finally almost through with her hands(you’ll find an explanation of that on…the Belle 3D Model page!)

This was a drawing that…well, I did, but I didn’t spend too much time on. It actually helped me to wind down from the craziness of 3D modeling Belle. You can see all my journal updates about that here. 3D modeling Belle is actually making drawing her easier for me. Also, for anyone who doesn’t know, Matilda is Mighty the Armadillo‘s sister! Matilda’s caption probably should have said “partially roboticized powerhouse”, since she’s only partly robot(like her arms). And then there’s Tangle filling the empty white space that would’ve been there otherwise. She’s supposed to be like, standing where you are as a viewer, but it might appear like she’s behind Belle and Matilda. It’s fun to draw simplified stick Tangle! Way more Sonic fanart where that came from, like Tangle x Mighty!

You know those AWESOME art pieces where artists use real-life objects and place them on top of their drawn art as a part of the artwork? I did that. Sonic’s gotta go fast! It was a really, REALLY quick drawing of Sonic, so I guess that’s within the theme of the artwork? 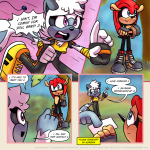 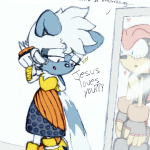 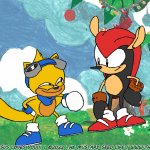 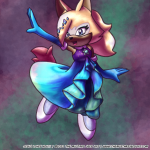