I split up the 100 Faces Meme Challenge with another artist. A new image drawn within an hour(-ish) time limit daily! Jesus loves you!!!

Cream is so cute, this is such an innocent child-like expression! Tried doing some hatching for the shaded spots, gonna need to practice that more.

For this one, I started sketching in Autodesk Sketchbook, then color(not the outline) and refinement in Photoshop. A different style than any art I’ve ever posted.

So since Spider-Ham doesn’t have a mouth(well, at least not technically), I gave him a sign mouth. This one took about an hour.

Lego Sonic on construction paper; penciled and lined in 25 mins. He’s impatiently waiting for something.

I was challenged to do Cat Noir this time. Never drew him in my life, so please excuse this 45 minute attempt at drawing him in a unique expression. Drew it on construction paper like Lego Sonic was on Day 4, but I also threw in some hatching and a little pencil shading(barely).

Sonic 2 went to theaters the day I drew this, excepting the early access showings on April 6. 😆 So excited! On Day 6 of the 100 Faces Meme Challenge, I challenged the other artist to do Live Action Knuckles, and I was challenged to do Movie Tails. This one took an hour and a half, and it honestly didn’t look pretty, so I jazzed it up with some filters and pop art orientation! I dunno what he’s angry about…

First, I sketched him, that took 20 minutes, then it was to the digital realm! I’m notoriously known to myself as not being able to draw horses, so if you can’t tell that this is Spirit, but you can tell he’s a horse, I’m good with that.

This challenge is definitely making me draw characters I never would have drawn otherwise! Here she is! I present to you, Day 8 Challenge, Alex from Totally Spies! Never watched the show…that’s what I have to say.

Tried going lineless to match the style. Well, that and I wanted to try it anyway. The edges are sharp, and the hands could have been better, but hey, it was an 1 hour and 10 minutes on a character I’ve never really drawn in a random expression, so it’s fine?

Rodney Copperbottom from Robots. I tried a looser style, utilizing the soft pastel brush. Adding the tight specular shiny-ness on the blue really helped convey that it’s metal or something.

Today it’s Blaze! The shading is lazy, but the circle gradient and drop shadow in the background make the quick photo feel more dynamic! One of my favorite elements in this art is the wrinkle on Blaze’s sleeve.

So, for this one after I lined it, I selected the line layer and then smoothed it by, was it around 10px? Also, swatching the line color from a photo and using that instead of black changed the art.

This one was REAL easy going. I don’t know if Paddington has teeth in the book, but I think he does in the movie version?

There needs to be an emoji that better represents this face for artists drawing it. I’m sure the shading is all wrong, but the eyes were supposed to glare, and that’s what I did.

Luigi from Super Mario! This time I did vector art in Illustrator! Let it be noted that the initial sketch wasn’t done in Illustrator, but the color and outlines were.

For this one, I went 3D-esque line-less! I still need to work on that more, but I’ve got to say, I don’t think it’s too bad! Also, when I was penciling him, he looked like Rough & Tumble from Sonic. Is Crash Bandicoot a skunk?

Movie Sonic! I tried to do him in the style of the Pre-Quill cover, but then I ended up doing a bit of my own thing too! I’m not gonna complain about this one, not bad for an hour and a half, not bad at all.

This is a cuddlefish from Subnautica, a game I’ve never played, done in the style of Narwhal & Jelly, a series that has a book I love(Peanut Butter & Jelly). Cuddlefish don’t really have tongues, or at least they don’t seem to normally stick out(yes, I researched a little), but here’s what a cuddlefish WOULD look like with a tongue.

Ta-dum! Toadette from Super Mario, done in a Sonic cover artist’s style! It was really interesting trying to imitate this style, and the brush I used for shading was SO fun! I just realized I forgot the white stripe on her dress…let’s just say she’s wearing a solid pink dress today.

AMY!!!! Do I need to say that she’s a Sonic character? Well, if I did, then now you know! I tried to play off of the Japanese Sonic art style a bit, leaving the lines running over the art. If you look at her ear you can see the excess(it’s also a time saver!) One way to interpret this photo: Amy is looking at Sonic & Rouge(they’re just being friends), but Amy does not know that…I challenged the other artist to do Rouge for Day 20!

The adorable internet sensation, Bongo Cat!(if you can recognize…Bongo Cat does NOT have eyes like that…) I think I have to say this is one of the most laidback ones I’ve gotten challenged to do so far(20 minutes?!)

In a outlined, soft shade style, please welcome Drill Kirby! He looks like a fake Kirby, if I’m being honest, but that was the facial expression I was challenged to do!

Another character from a show I’ve never watched! In the past, I’ve struggled to draw braids, but with Nani’s photo as a reference, it was easy and fun! Also, apparently for stabilization to work in the program I use, you have to zoom in enough or it won’t correct the lines(depending on the length)

Last time, I said it was a character from a show I’ve never seen. Well today, I give you the Axolotl, a animal that I don’t remember ever hearing about…I need to improve on drawing realistic characterized things…

Hungry Luma! I tried something completely new this time and did a 9 frame sequence of Hungry Luma disliking peppermint candy! I think he came out good, especially for the timeframe!

Program hopping with this one! I sketched the pencils in one program, switched to a different one for lines, then went back to the initial program to color! The outline came out really chunky!

Molly from Animal Crossing! She’s dancing! This was 3 frames. It feels like she could be an emoji!

It’s Katie from Horton Hears a Who! She is an interesting character to draw…Say cheese! Actually, at one point, her fur did look like shredded cheese.

Today’s pick was different. Instead of having a character chosen for me, I was given the word “Potato” as a prompt, and from there I went and drew El Gran Gordo(which is Eggman) and voila!

I drew Infinite unmasked! The gradient blend layer at the top really helped and added an awesome effect!

This is the first DIGITAL human front view art I’ve done for this challenge, and I got it done in UNDER an hour. YAY!

Today I was assigned Martin from Wild Kratts, but the version was my choice. I chose the Blue Jay costume!

The theme/inspiration chosen for me today was the Noot Fish from Subnautica. Just like with El Gran Gordo(Potato), the rest was up to me! So, I give you Toona, a girl who’s look and outfit is inspired by the Noot Fish(and maybe a little inspiration from Conquering Storm, the Sonic character?)

So, changing it up to accelerate the challenge! Now doing 4 drawings a day in around an hour collectively! The times listed for the four above are the sketch time. Coloring all four of them took an additional 10 minutes and 48 seconds.

First, there is Hyper Sonic! It was fun coloring him, because he isn’t just one color, it changes, so finding a way to try and demonstrate that was interesting!

Princess Peach. She’s looking like “whaaa?” Her mouth is awkward to understand, and the way I left it isn’t perfect, but y’know.

Now, let me say that Stylized Infinite is not my style. I was challenged to reference a certain style of Infinite, so that’s what I drew.

Lastly, another prompt inspired piece, my word today was “Mango”! So…I drew an owl! His nose is the leaf of the mango, and his teeth are mango slices!

Still going with the 4 a day! This time, the times you see above includes color time.

Mighty the Armadillo from Sonic, if you’ve seen my Sonic art, you know that I draw him A LOT. Still, it was interesting to draw him in such a time constrained manner. I also referenced the classic Sonic comic style, which I normally don’t do.

It’s-a-me, Mario! Ever since I 3D modeled Mario, I’ve understood how to draw him better. I’m happy with how he came out.

Koya…I’m sorry he looks so creepy…that was the facial expression…let’s be thankful that normal Koya has black closed/open oval eyes!

Another prompt was chosen! Feather Fish from Subnautica! I really like how she came out, her hair and clothing really captures the prompt inspiration.

So, here they are, another set of 4! Once again, the times include color.

It’s Classic Tails! One thing that is different about Classic Tails is his eyes. This turned out looking more like Modern Tails with classic eyes, I think.

Imagine if Iron Spider had a mouth in sync with his mask, and you could see it. That’s my drawing!

Yoshi LOVES melons, so he would love melon jelly too, right?

For Juliet, I wish I could have rendered her ceramic-ness better, but I already went longer than I should’ve! I guess not bad for the timeframe!

I’m happy with how Maria came out, and even though there wasn’t time for shading, I like the muted tones I used(cuz’ I don’t think I swatched for this one)

Irish looks like a green Sonic to me. I’m also satisfied with how he turned out. I like the green-ness(time-saver, haha)

And lastly, my given prompt was Subnautica’s Hoop Fish, so I drew a girl with hoops and messy makeup!

So, FULL credit to my co-collaborator for coming up with the idea to redo a Sonic show scene! The scene was my choice, so I chose one with Cream in it so that I could draw her again as my final, since she was the first person I was challenged to draw for this whole thing! I went WAY over on time(but I mean, come on, it’s the last one of the challenge…), and I am so, so, so, happy with how it looks! I think I imitated the style well for 2 hours, and I love the change of expression(because in the original scene, Cream is innocent/sad looking, but not here! Imagine if Cream would’ve put a fight when they caught her!) HUGE THANKS to my co-collaborator for challenging me to do this ENTIRE challenge. It was SO fun, and I know that I’ve learned and improved a lot by participating in it. Well, this challenge is wrapped up, but the art doesn’t stop! The Tangle x Mighty sketch challenge is still ongoing(as of this time), and as always keep your eyes out for more art to come! Thank you for viewing! Jesus loves you!!! 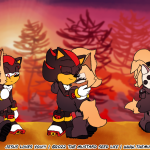 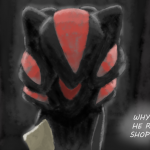 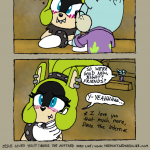